Lunch with Appu and then dinner with Sagar - Potpourri, Inorbit Mall, Vashi

One of our favourite eating out places in Navi Mumbai is Potpourri at the Inorbit Mall at Vashi.Rhea and I are willing to accept any excuse however trivial to dine there. There are 2 main reasons for this; the food is excellent and the Chef (Raunak) has become a good friend and 'cause we enjoy our food he goes out of his way with specials, recommendations and service.
Some days back our friend Appu reminded us that she had promised to take us there for lunch and was fed up of postponing the event ... so Rhea and I gleefully agreed and went over to Vashi.
Potpourri usually has a buffet lunch which is simple but delicious and most importantly ridiculously under-priced. Yes you read it right - Under-priced! Agreed that the non-veg dishes are chicken and never any other meat but still  - A salad counter (that has ingredients changing every day), veg/non-veg pizza, usually a live pasta counter, 4 mains, 2 desserts, 1 glass of complimentary Iced tea and all this for just Rs 350/-. They also have a very well stocked bar which we have discovered makes a mean Mandarin Mojito.
We got there early and proceeded to chat up the chef and buy some of the gorgeous bread that he makes on the premises .... we settled for a Sundried Tomato and Onion Plait. 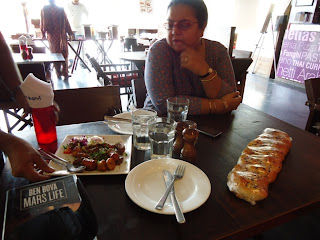 We had decided to go A la catre and called for some Mandarin Mojitos (sugarfree version for diabetics available on request!!) and we called for Raunak's famous Spicy Pork Sausage with Beef Bits and Baby potatoes for starters and we 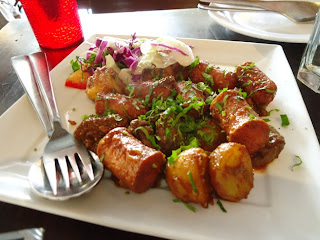 The first batch was made for us with Raunak outside the kitchen and his sous chef substituted regular sausages instead of spicy chorizo ... Raunak was aghast and immediately went into the kitchen to remedy the mistake. 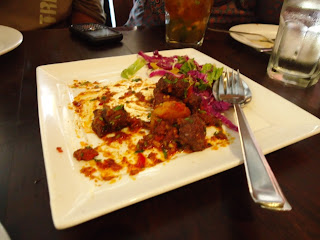 Chorizos with Beef Chunks and Baby Potatoes in a spicy sauce 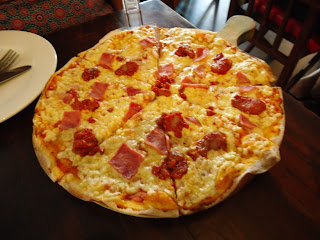 When Rhea heard that Appu and I were going in for the Steak she opted for the Farmer's Pizza ... thin crust, stone base oven pizza with spicy suasage, ham and bacon bits. 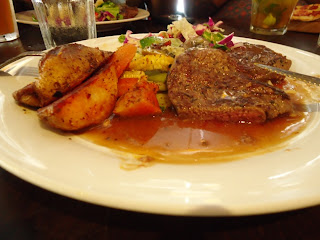 My Steak Medium Rare ... pink on the inside with nice peppery wine reduction, Cajun potato wedges, grilled veggies and salad. 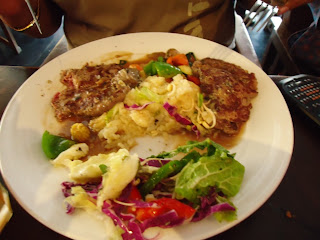 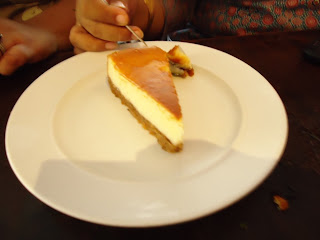 The ladies finished with the Philadelphia Cheese Cake ... of which there was sadly only a single serving! 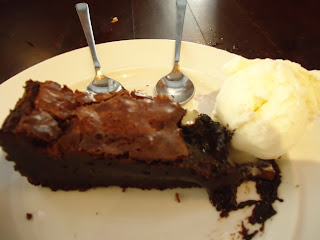 I decided to boldly try something new and went in for the Gooey Chocolate Pie ... It was downright awesome and I didn't even miss the Cheesecake one little bit!


***
To my surprise I was back at Potpourri the next night itself catching up with an old boarding school buddy - Sagar Ronghe who work as a Petroleum Geologist in Perth and was down to train our ONGC boys in a Marine Geo software that his company develops. He was being put up at the Four Points at Vashi and didn't even have something remotely charitable to say about the food. 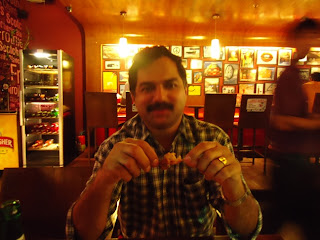 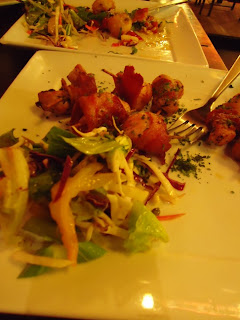 We called for drinks ... beer for my Aussie friend and Mandarin Mojitos for me ... with  them we called for some Oriental Prawns (Top) and Bacon Wrapped Herbed Chicken (Foreground) with a really nice dipping sauce ... which was seriously appreciated. 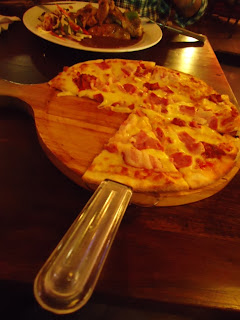 For the main course I went with the Farmer's Pizza (Above) and Sagar decided to go for the Roast Chicken in a Beer Gravy ... whilst the pizza was great the chicken was a truly delightful dish (Below) and was not just pan fried to perfection but superbly complimented by a simple beer gravy that appeared to have been made by 'deglazing' the pan in which the chicken had been slowly fried. 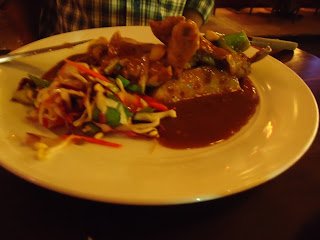 We finished of course with the Baked Philadelphia Cheese Cake! :)