Of Failed meetings and Fine Food - Lunch at Malvani Aswad.

A few weeks ago an old friend asked me to do an old friend of hers a favour. What was the need of the hour was an archaeologist to speak to a group of visiting researchers. They were looking for an anthropologist but since none was available at short notice would I sub and help out? I wasn't doing much the next day so I said yes. Sent my CV in which was promptly forwarded to the researchers. The meeting was scheduled for the next afternoon at 1 pm ... at 12.30 as I was enroute I received a panicked call asking me if I would speak briefly to the leader of the research team. I said yes and there followed one of the weirdest telephone conversations of my life. It consisted of questions as to my ability to answer questions each of which was followed by the questions 1. Are you an anthropologist? and 2. Would you call yourself an anthropologist? All the routine questions got the correct answers but I replied negatively to the Anthropologist queries which were becoming very repetitive and weird.

I reached the meeting place in Vile Parle E in Mumbai and was met by a very flustered friend of friend. Who apologised profusely and told me that thee meeting was scrubbed and that the research team was off to lunch. They hadn't realised that my CV didn't say anthropologist(!) and that they couldn't discuss the topic with me as their principles had specified that they were to talk to an anthropologist! I was ready to throw a fit when I realised that the lady organising this wasn't to blame and was terribly uncomfortable to boot. She apologised profusely, showed me printouts of her emails (including my CV) and an affirmative call by the team. She was almost in tears and I thought "what the hell let it go" and proceeded to do so. In an interesting twist she insisted on remunerating me in full as it wasn't my fault in any way (her words). I was tickled and decided to treat myself to lunch.

As I left the building I remembered a small Malvani restaurant highly recommended by my friend, food blogger extraordinaire, Kalyan. Its a small hole in the wall joint called Malvani Aswad and the only restaurant I know that is shaped like an elongated parallelogram with a kitchen in its loft. It has no A/c and no loo but the simple (very clean) restaurant is always packed with diners.

True to its reputation it was packed to the gills with about 20 people waiting to get in and another 8-10 waiting for take-aways. This is always a good sign in the food business. I was offered a plastic chair on the footpath and I sank into it and pulled out my Kindle. 15 mins later I was asked to place my order and told my table would be ready in 10 minutes and so would my lunch. i decided to go with the Kombdi Masala served with Vade. In other words a chicken in a thick yellow brown dessicated coconut gravy redolent with  roasted spices served with deep fried puffed breads called Vade. Vade are a bit like puris but thicker and coarser giving you a lot of texture as you eat them. And just to be a bit of a glutton I asked for a side of fried Surmai (Seer). 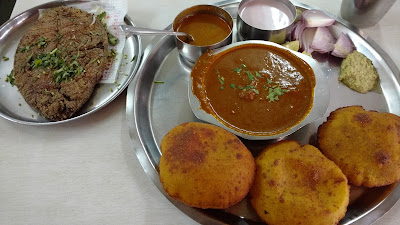 Ten minutes later I was shown to my table and a minute later my lunch was before me. The Chicken was everything I hoped it would be and the Vade were delightfully crunchy. The fish (a large slice) was fresh, succulent and well coated with Malvani spices. A small bowl of a thinner curry (with the teaspoon in it) and another of Sol Kadhi (Coconut milk and Kokum extract), lime wedges, onions, a very nice and super fresh chutney also came with my lunch. The food was spicy yet not chili hot and the Sol Kadhi was there to soothe the mouth in between bites. It was one of the best Malvani meals I had had in quite a few months.I heartily recommend this restaurant. thank you Kalyan for directing my footsteps and stomach this-a-way.

But I wasn't yet finished with lunch. Sitting outside I'd spied an ice-cream freezer loaded to the gills with a variety of things amongst which was a blast from the past. An ice-cream from my childhood days called a Cassata. This was a slice cut from a hemisphere or roll of multiple ice-creams (traditionally strawberry, pista and tutti-frutti) spread over a base of cake and topped with nuts. I hadn't eaten one of these in many years and I just had to cap this awesomely great lunch with an epic dessert and I asked the gent at the ice-cream freezer to do the honours. 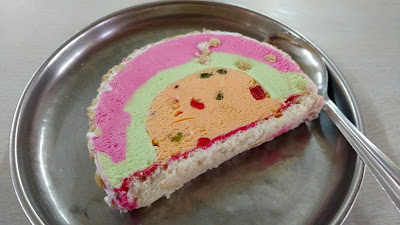 Some time later sated and very happy I wobbled out of Malvani Aswad with a second helping of chicken for R's dinner (and as a peace offering for having gone here without her).