Dum Pukht at the ITC Maratha 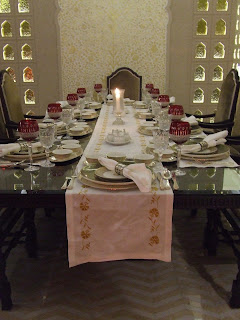 Rushina called me up in the last week of February asking me to join her in a Single Malt pairing with Indian Food. Alas, I was involved in archaeological field work in Mangaon Taluka and had to beg off. To make up for my disappointment she asked me to join her and a group of fellow bloggers at the ITC Maratha's newly refurbished and reopened Dum Pukht a couple of weeks later.

The cuisine of the Dum Pukht  is essentially Avadhi cuisine of the uppermost echelons. It is rich, redolent and delicious. The cuisine is predominantly non-vegetarian with Mutton being the mainstay. All the spice mixes always have one central spice that shines forth and can be easily singled out. Chicken, fish (mainly fresh water fish) and estuarine prawns are also major supporting artists in the ensemble. Dals of various sorts often cooked overnight, complex very rich desserts, sublime biryanis and a huge assortment of breads make up the cast. Vegetables are usually a part of the meat/fish dish with few solo exceptions like aubergines and okra. Their menus boast of a huge range of kebabs, salans (gravies) and other courses.

So with trusty camera in tow I zipped over to Sahar and met up with a whole host of blogger friends in the lobby of the ITC Maratha. Ever efficient Rini and Aishwarya had set up a beautiful table with some truly gorgeous handmade crockery by RAK Ceramics of the UAE. The new decor was way over the top and quite kitschy in a white and mirror way that made you feel opulent and Nawabi without being garish. Something I wouldn't do at home but wouldn't mind dining in. 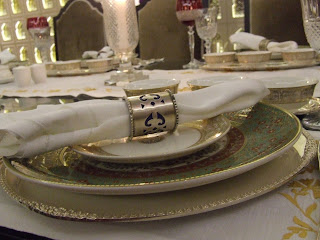 As we were led to the table the bloggerazzi reached out and brought forth an impressive array of cameras .... Pranav Kacholia, Megha Goyal and Saee Koranne-Khandekar deserve special mention for their impressive cameras!

We were welcomed with traditional Awadhi greetings and as we were seated we were presented with personalised menus ... telling us that we were in for a truly sumptuous feast of near epic proportions. The china was breathtaking as was the glassware. The Dum Pukht's sommelier then informed us that he had chosen specific wines to compliment the various courses and proceeded to serve us with a lovely South African Chardonnay. When I told him I didn't much care to pair wines with Indian food he quickly got me a lovely dram of 16 yr old Lagavulin that went surprisingly well with the meal.

We started off with an array of starters. The first up was a simple chicken kebab with silver varakh (edible silver foil). This was followed by a lovely crumbed fried fillet of Bhetki (Barramundi) marinated in lemon, an influence from the Bengali past of the Awadhi dynasty. Next up was the Kakori Kebab, super soft, extremely finely minced, delicately spiced Sheeks. These were finger lickingly delicious! The next starter was a surprise. Dudiya Kabab - pan fried roundels of panir with a middle layer of spiced and mashed potatoes which were finished using a technique called Dum. This was truly an eye opener and a palette pleaser. After this were served up some very interesting vegetarian Sheeks made with lotus seed and stems and then large tikkis made with spinach and chickpeas. 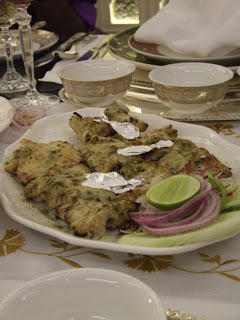 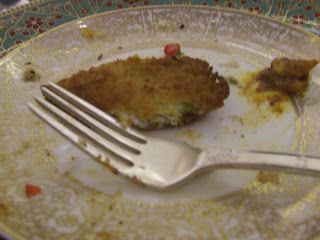 The next course was a surprise. It was a shorba - an Indian soup, the soup plates were sprinkled with crisp sprouted moong (sans the seeds!!) upon which was poured a thick spicy vegetarian soup made of vegetable stock and moong dal. It was a true treat, both in texture and flavour, and a surprising winner. 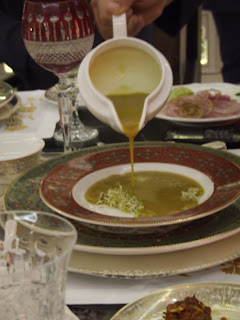 The salans followed next. First up was a Jhinge ka Salan, Prawns in a yogurt gravy flavoured with fenugreek. It was an unmitigated disaster. They had used the wrong prawn, marine Tiger Prawns instead of estuarine or pond raised Bengali Golda Chingri; a salan that was neither here nor there; and lastly by overcooking the prawn till it was a block of rubber! A waste of good seafood.

As though to make up for this we were served with a lovely simple chicken cooked in a bowl with a pastry top like a pot-pie. Interestingly, as many of the bloggers pointed out, the coloured bell peppers and tomatoes in it were definitely not period. 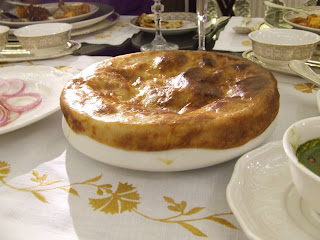 Next up was a sublime, butter soft shank of lamb in a rich, thin gravy redolent of almonds, ghee and whole garam masalas. This dish - Shahi Nehari, was a traditional breakfast dish enjoyed by the Nawabs of Avadh. Sadly in this day and age instead of being cooked slowly in its spices over 8 hours .... the meat had been boiled separately and then mated with the gravy. The top note was one of cardamom. One wondered that if this tasted so delicious how much more astounding the slow cooked version mus have been.

The gravy course was finished by a classic dal preparation Maash Qaliya. Suffice to say it was able to hold its own quite well amongst all the preceding stars.

The next course, and one I had been waiting for, was the legendary Dum Pukht Biryani ... a dish where spiced and marinated mutton was cooked inside long grained and aromatic Basmati rice. It was an understated, divinely fragrant biryani. There were no frills and no unnecessary garnishes, it was amazingly aromatic with a gentle but firm waft of mace and kewra.  The mutton was silkily soft and the rice was fragrant yet light. It was a true classic. The Burhani Raita that accompaanied it was the perfect consort to a kingly dish. 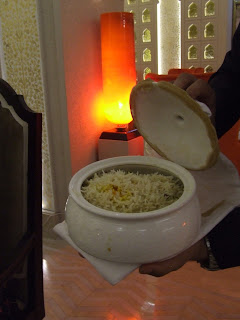 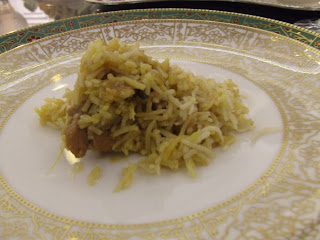 After all this we realised the desserts were still to come! The sommelier paired them with a Hungarian dessert wine which I tasted but refused, it was too sweet for me.


We were served the classic Kulfi which was quite nice, a Phirnee which was subtle and very classically understated and a enormous pistachio encrusted Gulab Jamun called the Shahed-e-Jam which was sadly too sweet and really not that great. 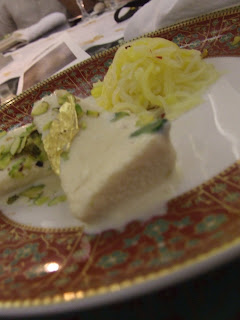 We realised that the Dum Pukht team had overlooked the very famous dessert classic - the Shahi Tukda - a slice of leavened bread, pan fried in ghee, then dipped in sugar syrup flavored with kewra and topped with a hot layer of Rabdi (greatly reduced slightly sweetened milk) and assorted chopped nuts ... Rini and Aishwarya immediately complied with my request and we were served a very nice version of this classic. Though I must say that Jaffer Bhai's version is still the superior one! 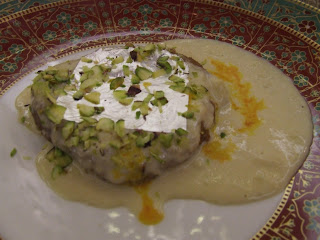 All in all it was one of the best meals I have had this year, the company was great, the service superb, the hosting exquisite and the food really really good. Now if they only sort out the way they do their prawns and tighten up their desserts this will be the meal/restaurant to beat in Mumbai. 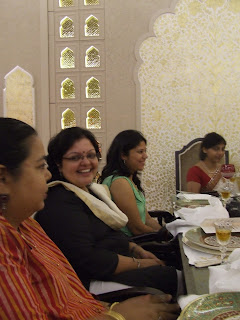 Posted by Kurush F Dalal at 9:31 AM No comments: