The three of us were joined in the lobby by Harini, Pawan and Megha and we proceeded to Hornby's Pavillion to meet Chef Sumeet (who runs the Hornby's kitchen) and Chef Somnath who had flown down from the ITC's Sonar in Kolkata to assure the authenticity of the Festival's cuisine.

I was a tad bit sceptical as the last such Bong food festival I had been to had a poor choice of dishes, they were not suited to a buffet and the food hit all those who attended that dinner quite hard in the belly ... but given that Arundhati had made such an effort I decided to give it an honest shot.

Right from the start we were put at our ease by Arundhati, Chef Sumeet and the ever smiling slightly cherubic Chef Somnath. The food was surprisingly authentic and the dishes were not the usual 'chaap, rezala, biryani trio' that are trotted out whenever the term Bengali Cuisine turns up. Though the ubiquitous 'Ilish' was present it was not the only star in the night's repertoire. The dishes were authentic, unapologetic, and most definitely not dumbed down for the Mumbai palette. The Shorshe bata (crushed and ground Mustard seed paste) had its 'jhaanjh' (mustardy spicyness) and the Aloo Posto its green chilli bite ... the food was cooked in mustard oil and no healthy concessions of Saffola or Sunflower were anywhere near the horizon.

The starters were an interesting blend of veg and non-veg and Harini's Vegan options were firmly in place. Not very surprisingly a lot of the vegetarian Bengali dishes were naturally Vegan.

The starters included Veg Chop and Phoolkopi Pakoda, the non-veg options were a very funky Chicken Cutlet and  Kobiraji Bhetki. The Bhetki was sadly completely unsalted and a fine dish came to a tragic end -the Chicken Cutlets on the other hand were reminiscent of the crumbed fish fillets that all 5 star buffets doled up in the 70s and 80s and were crisp, crunchy and great fun. 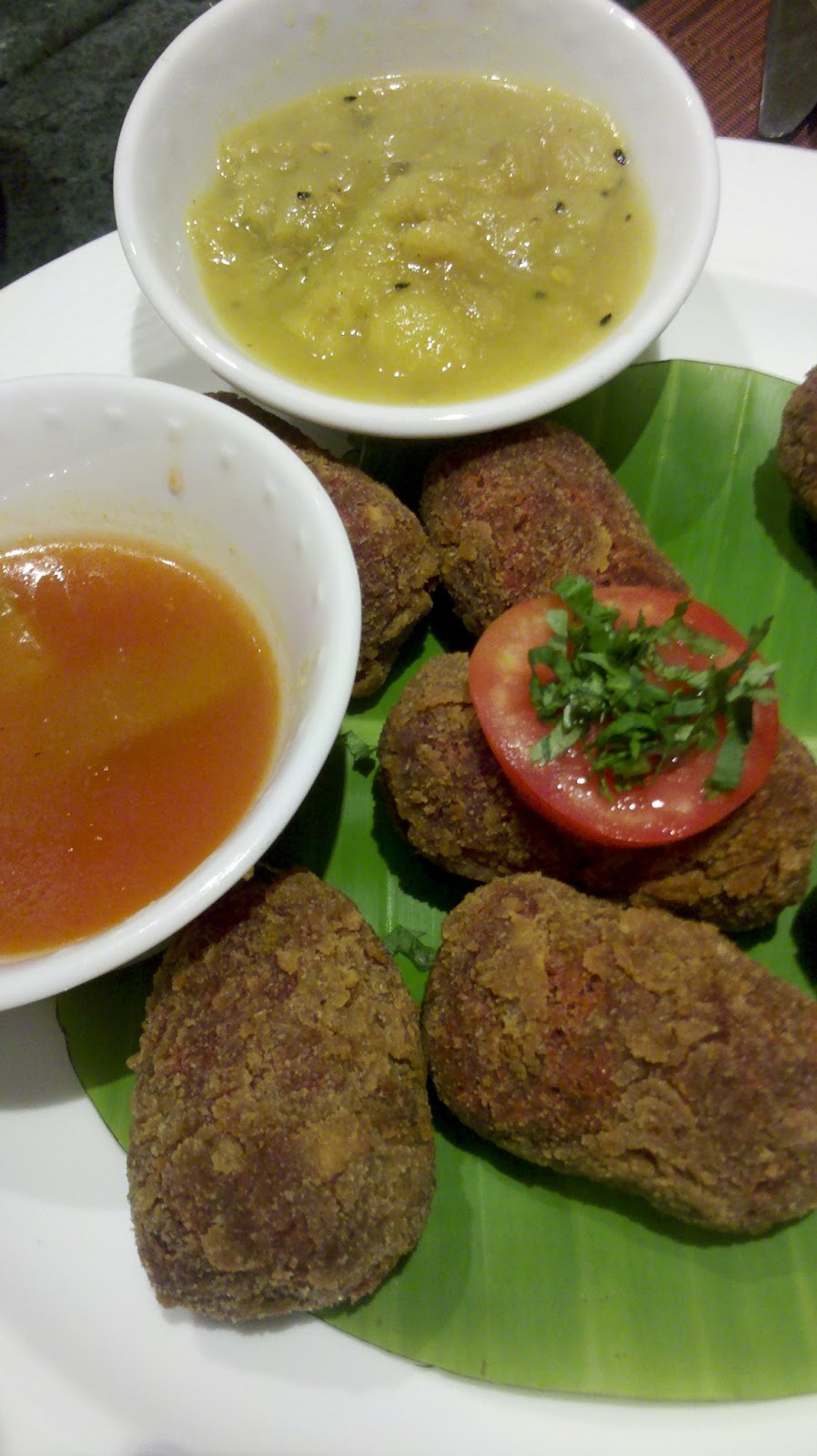 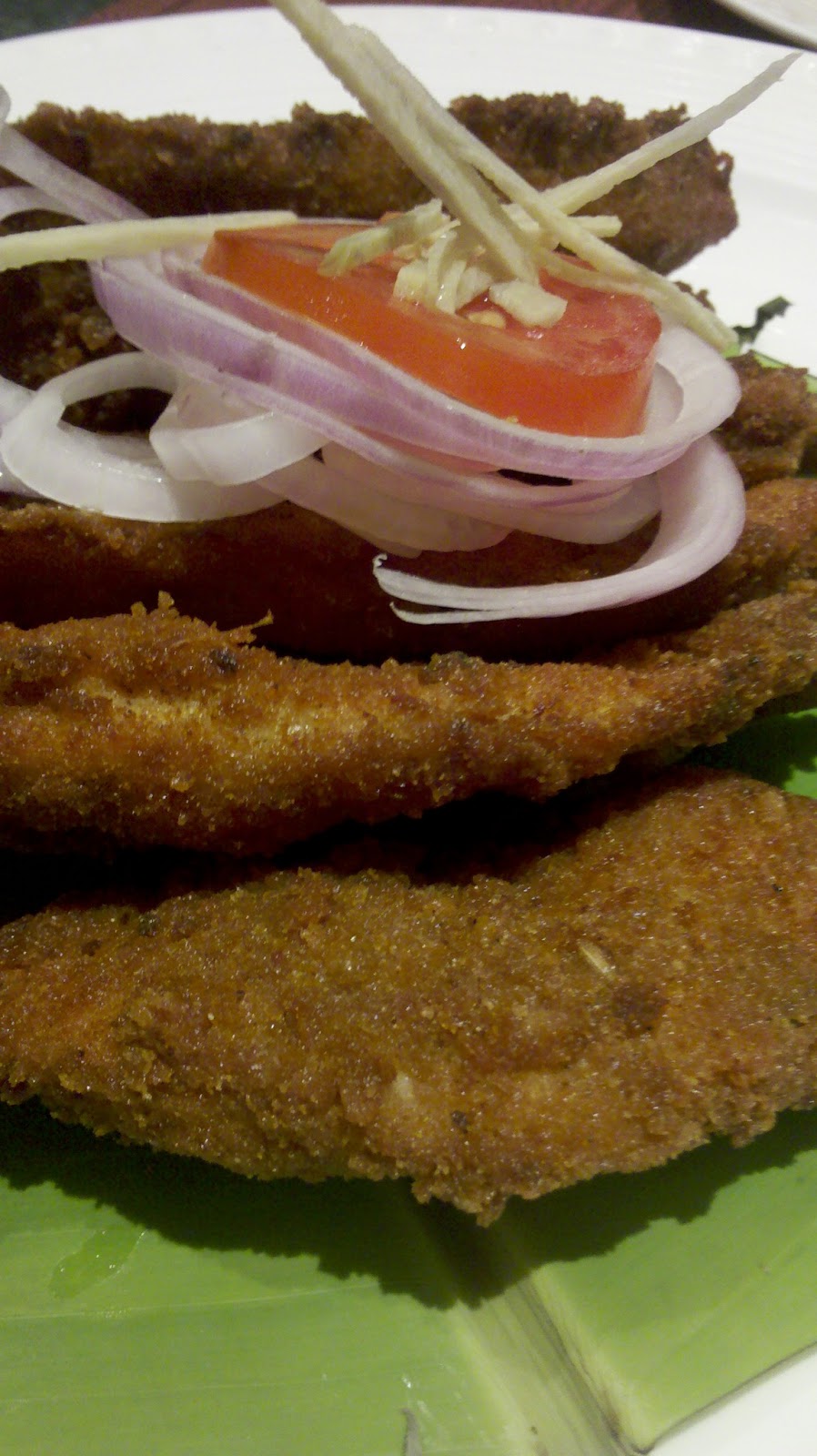 The Veg Chop (left) and the Chicken Cutlet (right) 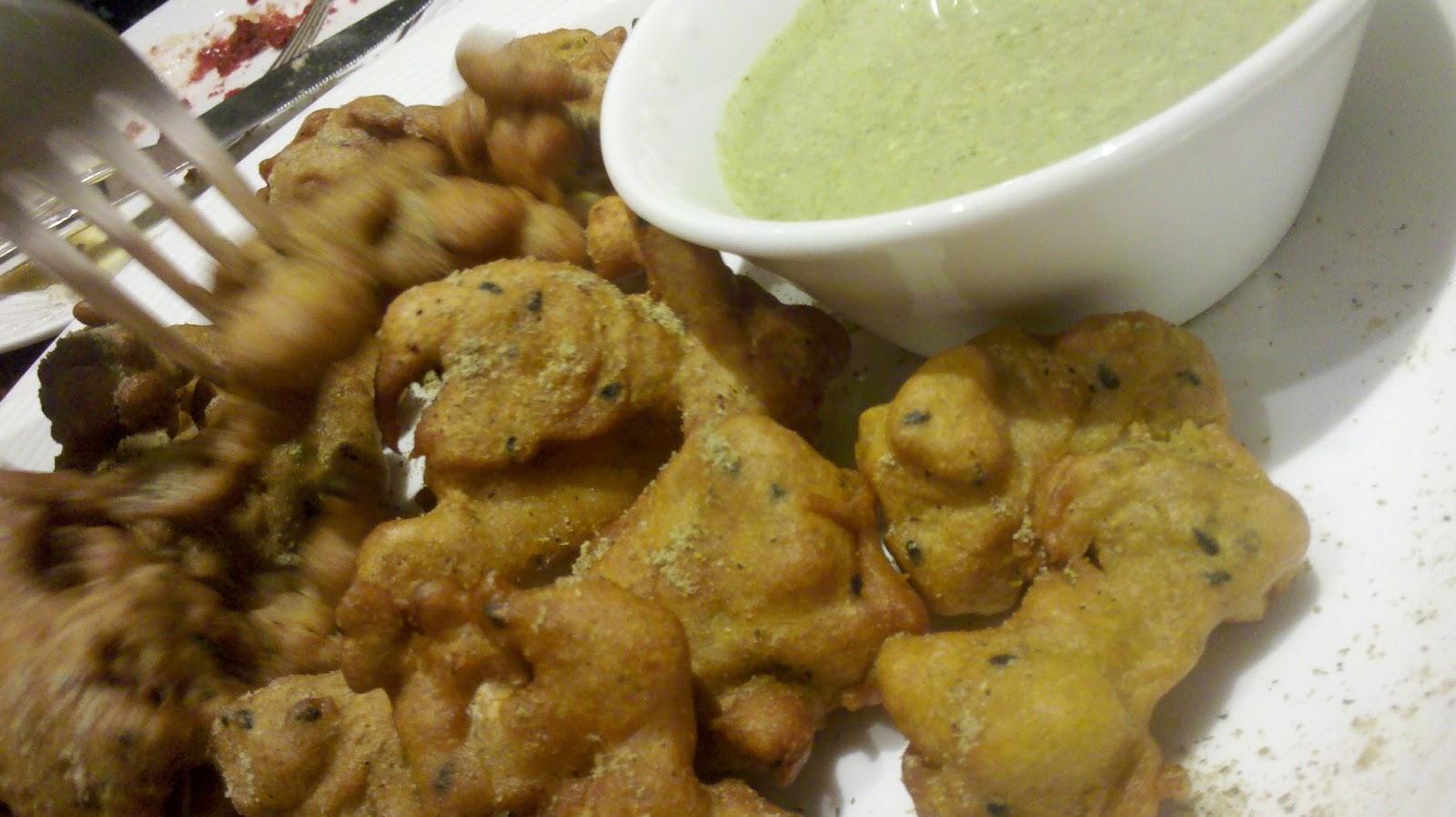 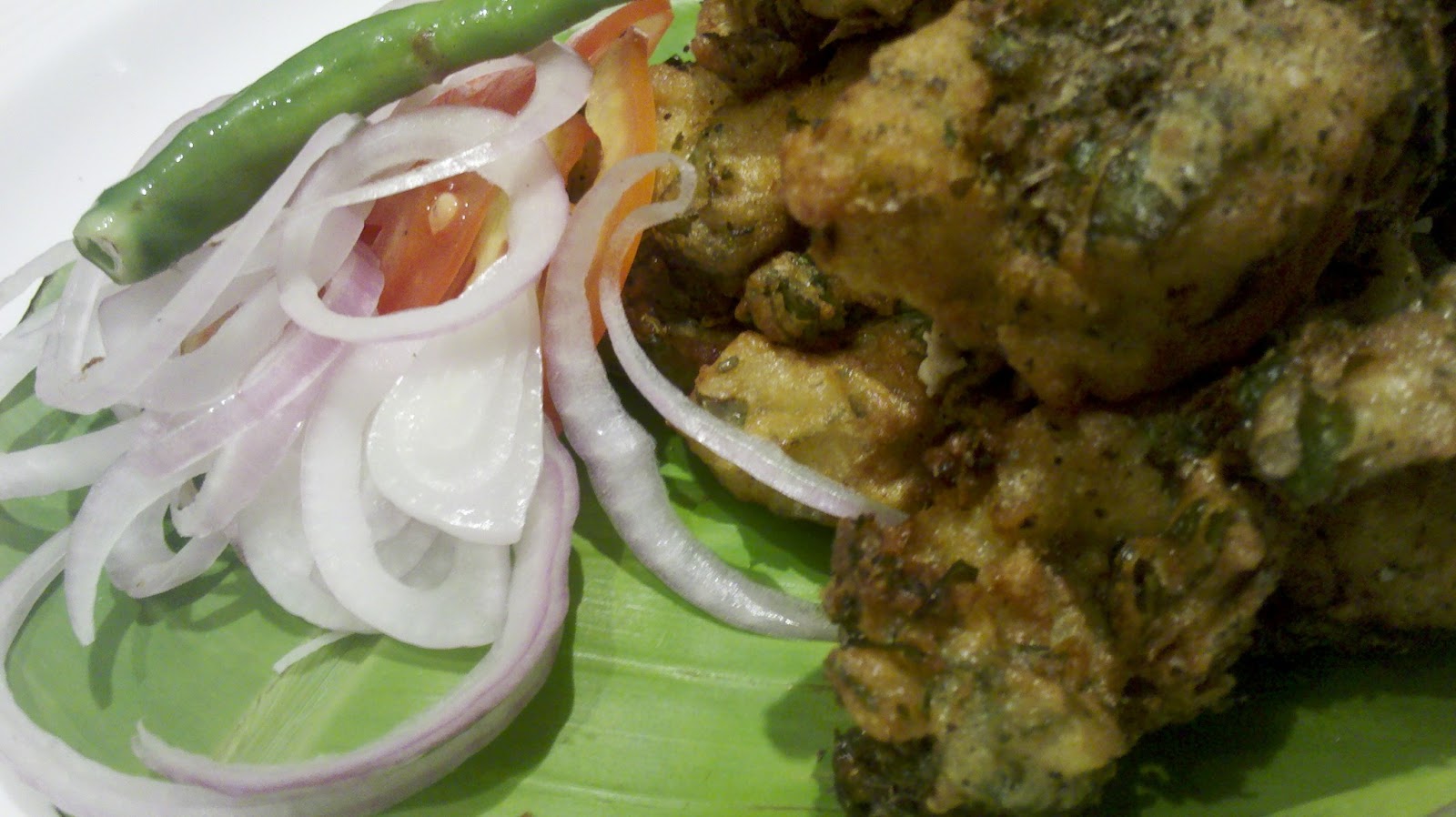 When the chef asked us what we'd like to drink I asked for Aaam Pora Sherbat ... a green raw mango cooler ... he was startled at the request and immediately set about to make some from scratch. The Sherbet was a great hit with all of us though Chef Somnath was not satisfied as he had to 'tandoor' the mangoes instead of a slow pan grill (to save time) ... the quest for perfection is after all the mark of a good chef!! 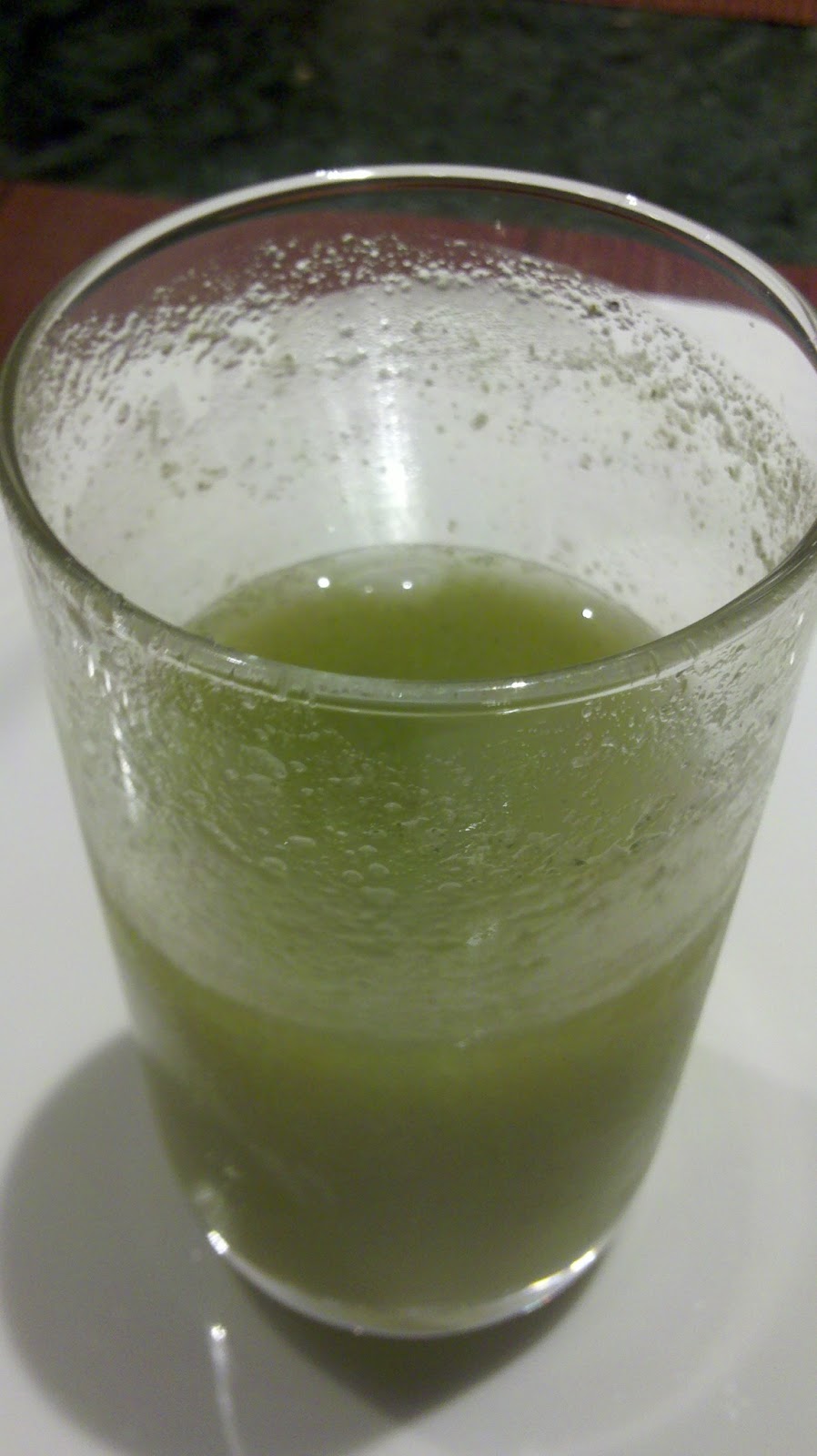 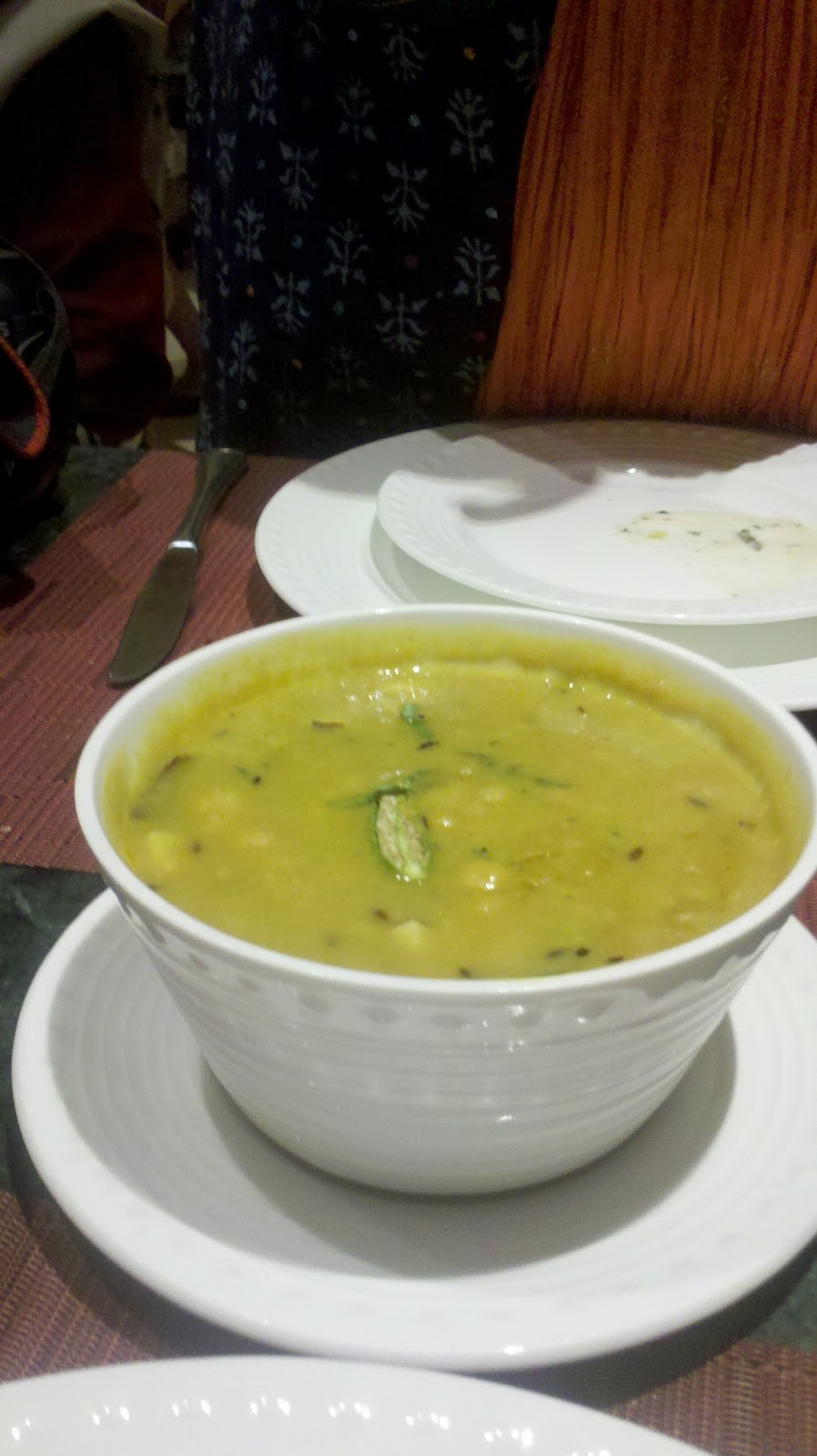 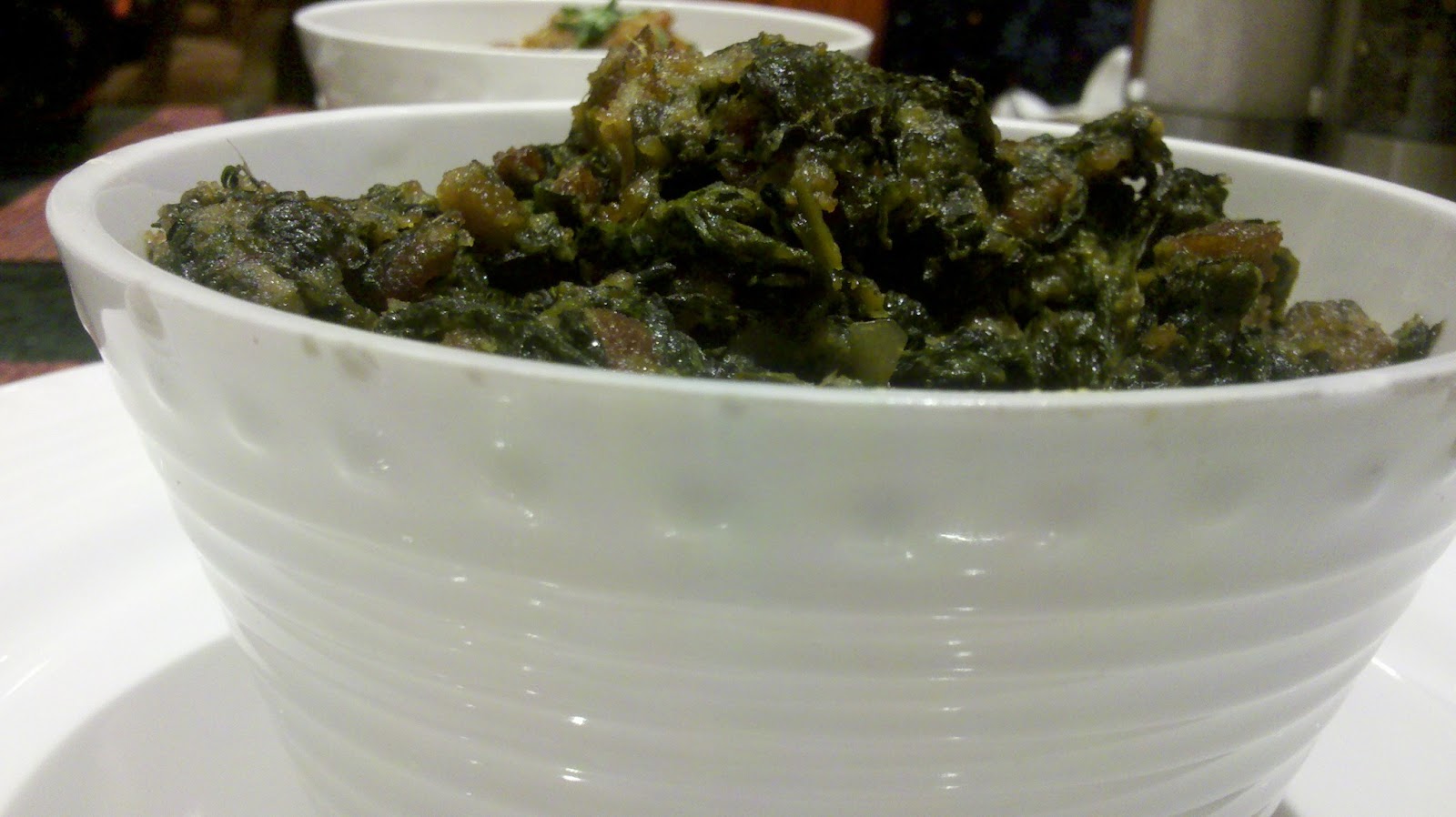 The non-veg main course included a lovely light Doi Ilish (Hilsa cooked with curd), A slow cooked Tangra, Shorshe baata Ilish (Hilsa cooked in a Ground Mustard Paste) and a luscious Kosha Maangsho (Mutton curry). The meal was completed not by the ubiquitous Kolkata Biryani (which according to me is a dry rice preparation with a large chunk of boiled meat!!) but a truly delicious Dakai Reyaazi Khaashi Polao (Rich Dhaka Style Mutton Pullao). 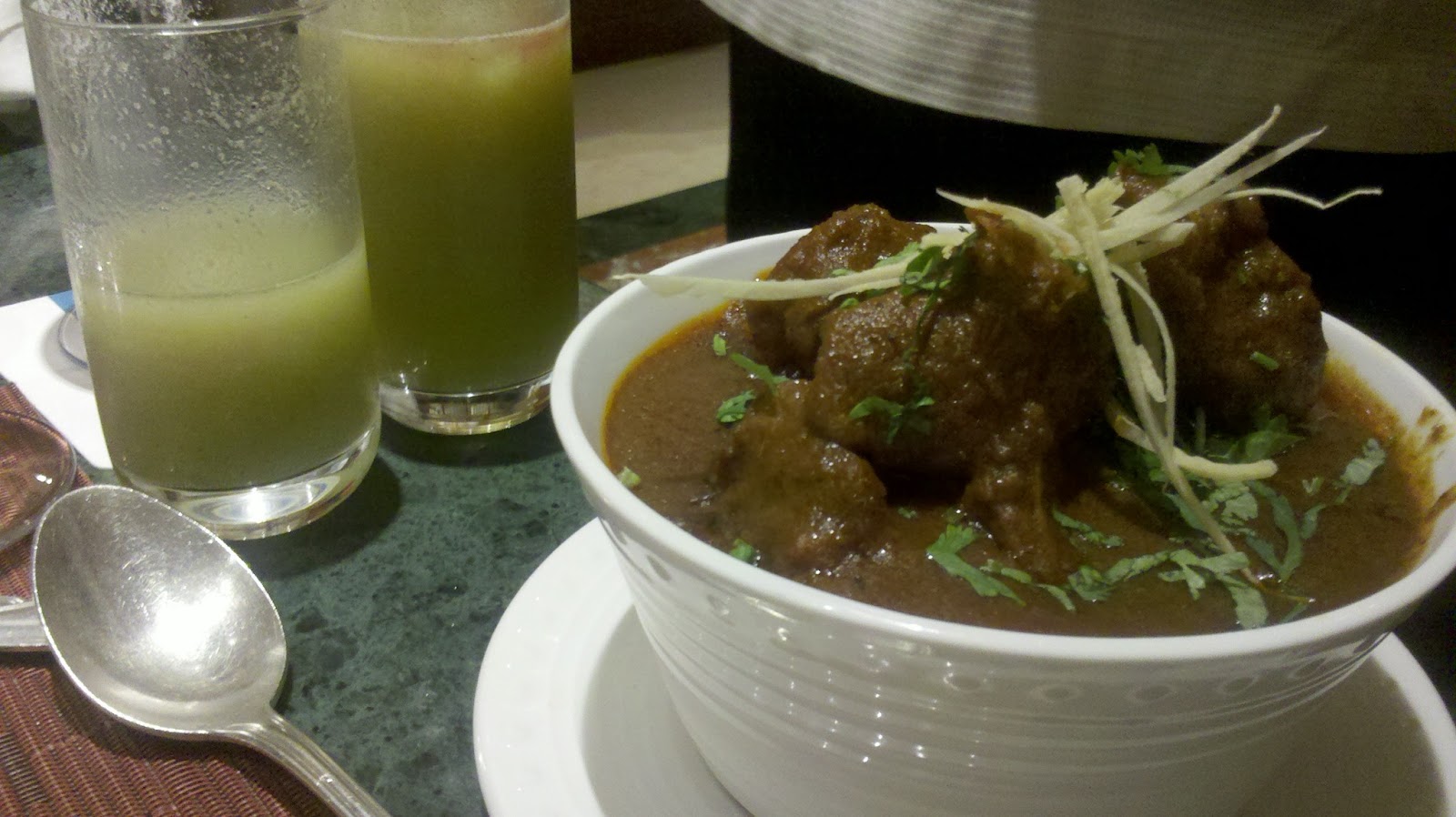 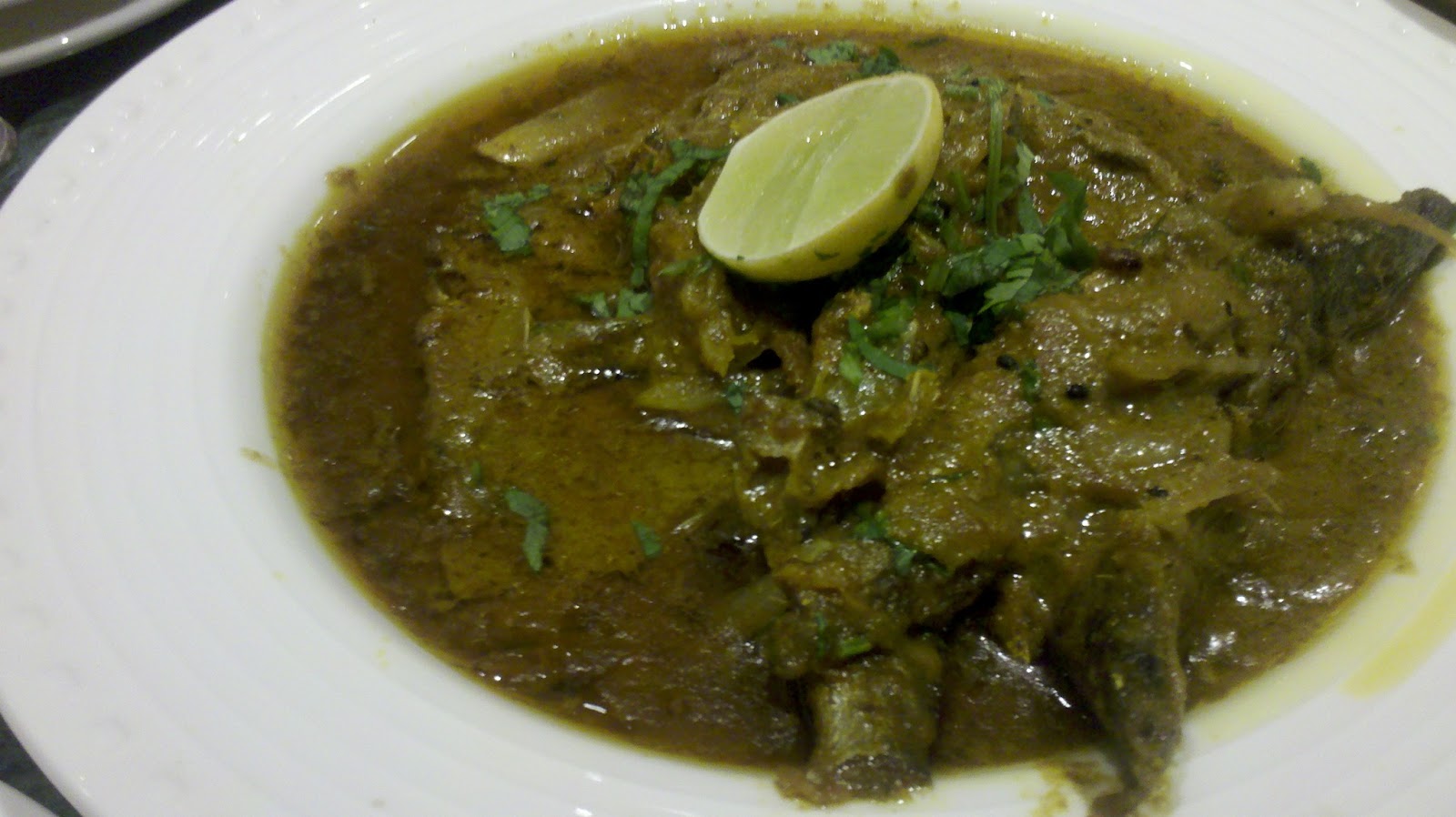 The slow cooked Tangra
(Chef Somnath was unhappy with its small size ... but Megha felt the gravy was awesome) 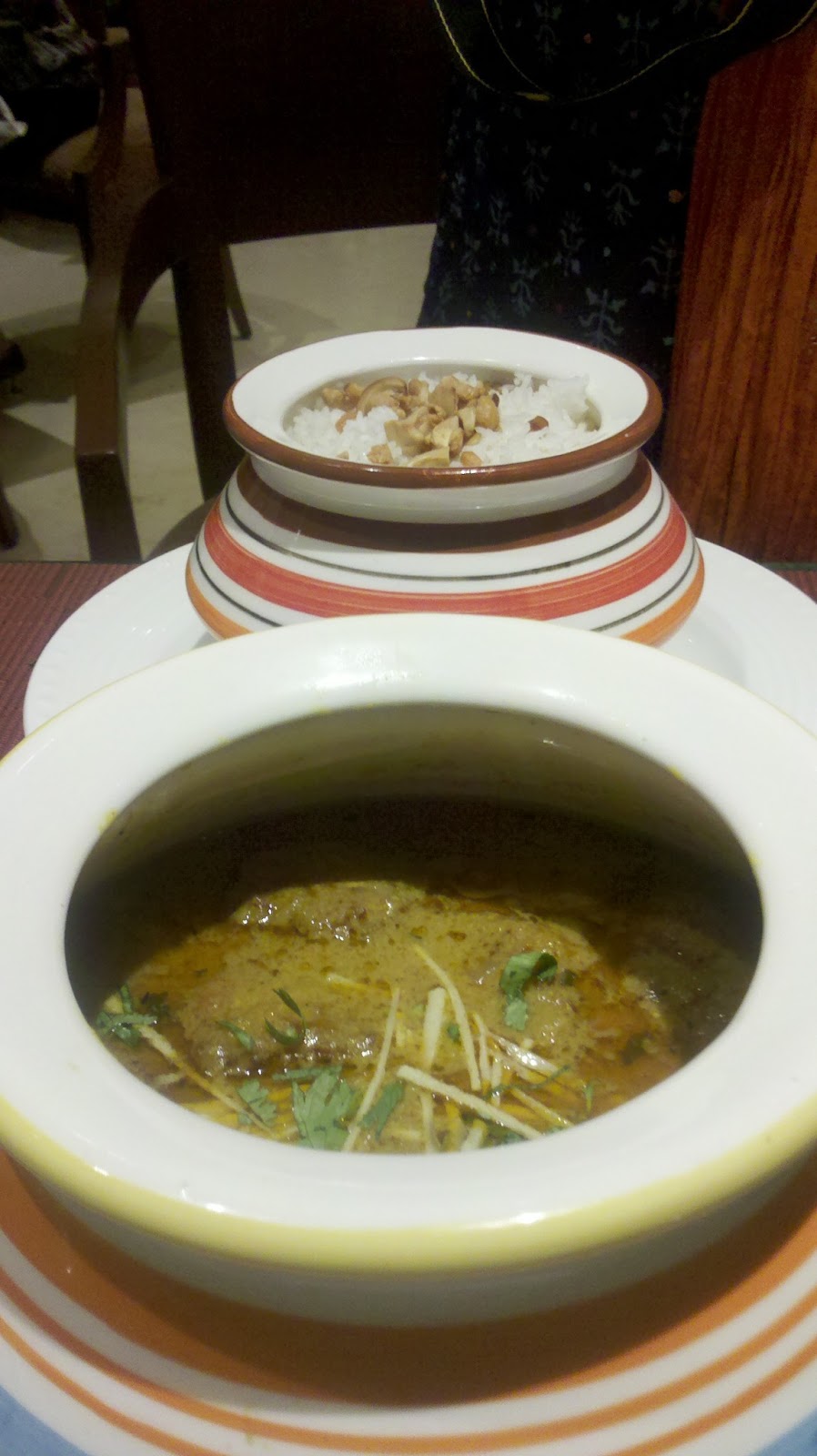 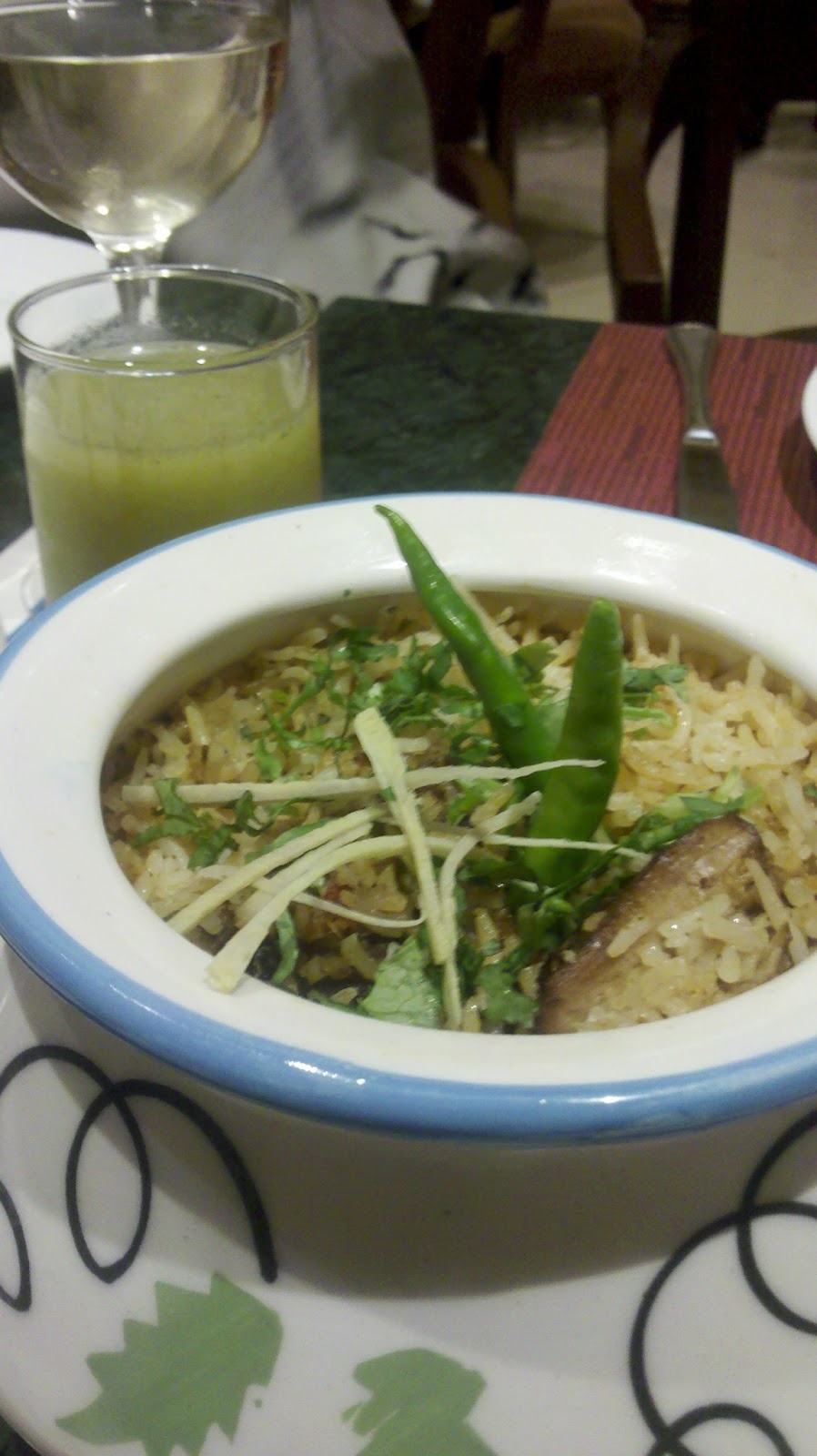 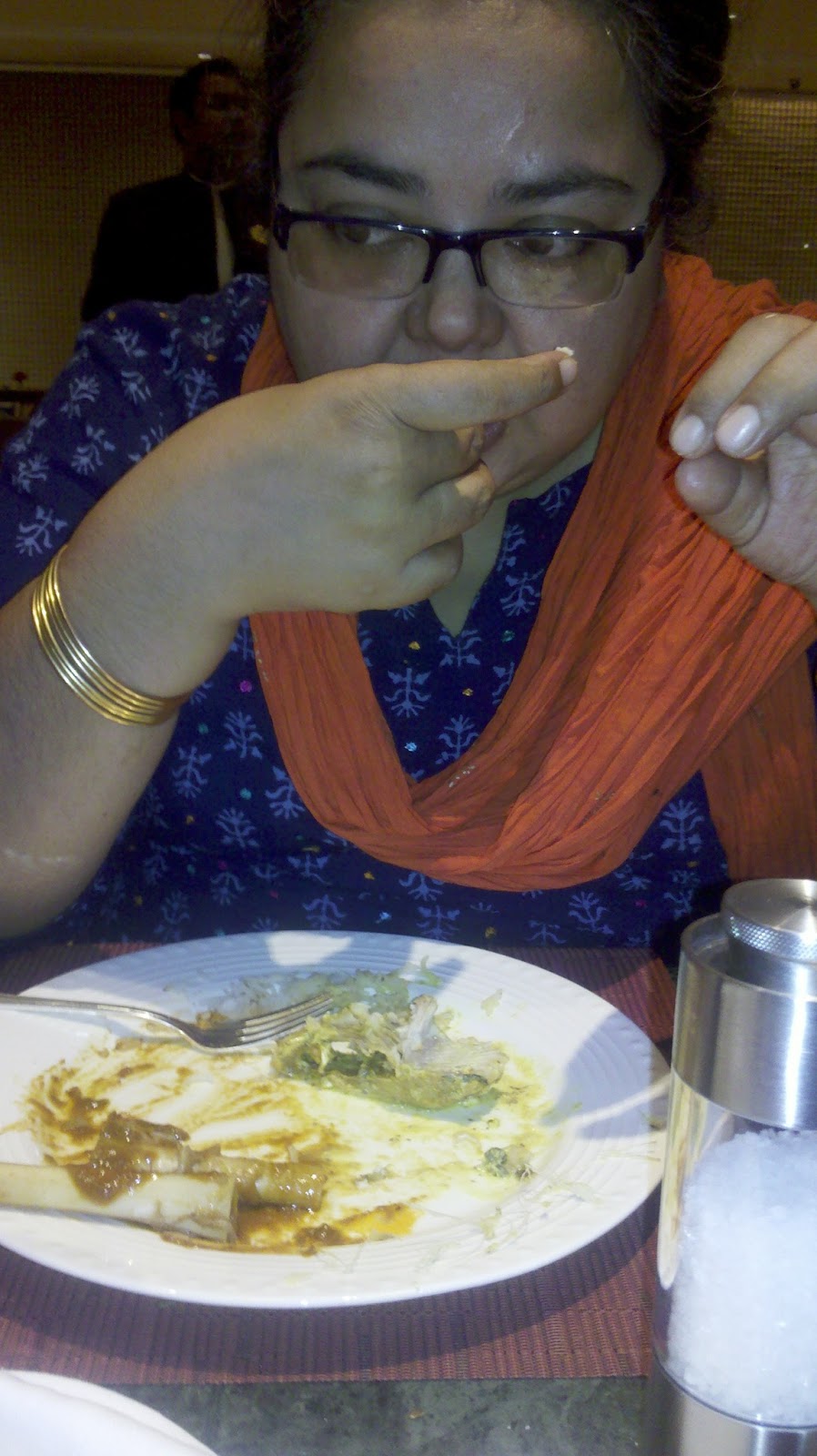 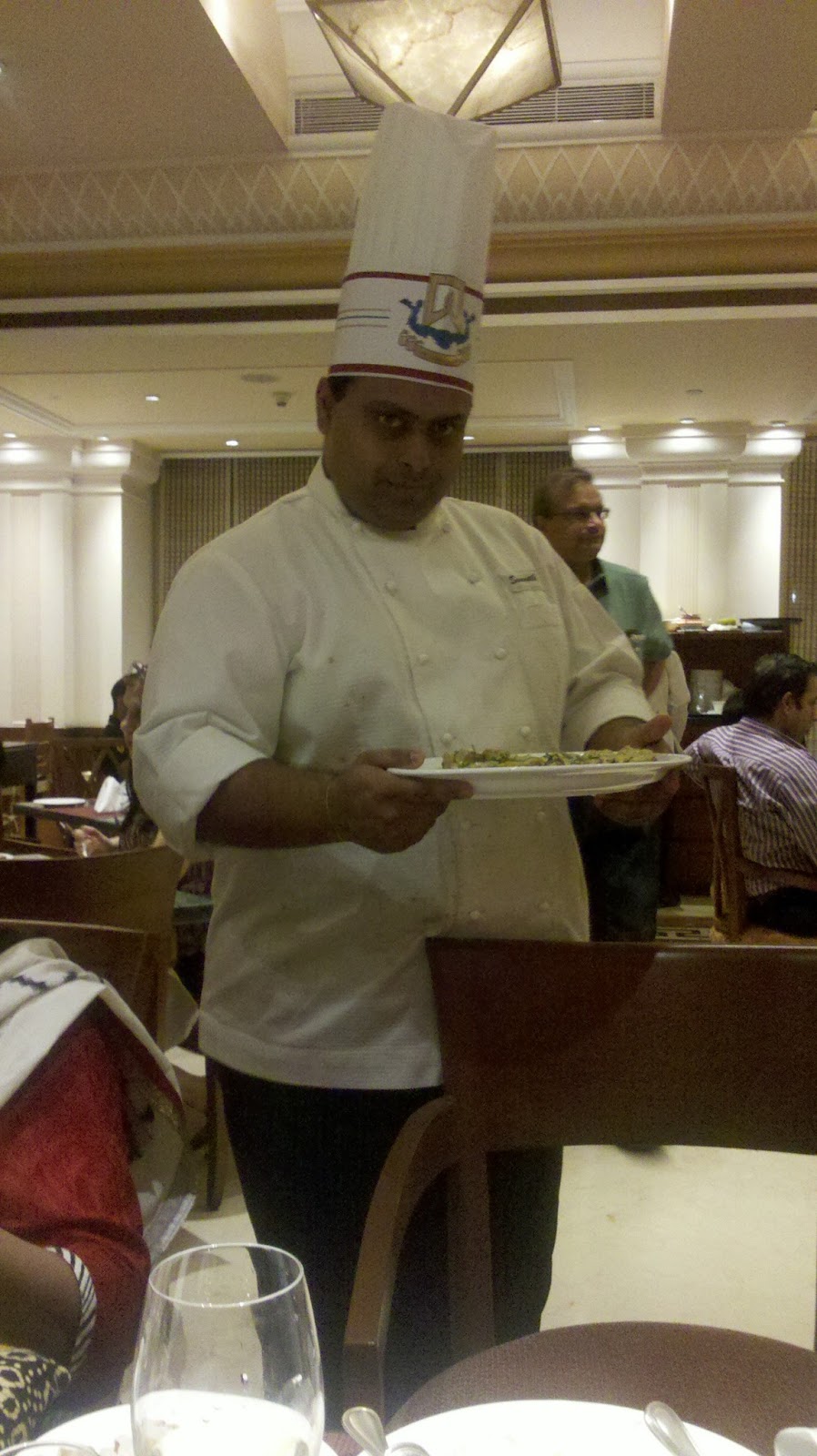 Chef Somnath with the Shorshe Ilish and Rhea polishing it off soon after.

The meal ended with a selection of Bengali Sweets and Mishti Doi (traditional Bengali sweet curd). The doi was good but not spectacular. The sweets on the other hand were really outstanding especially the Bhapa Sandesh and the Chitrakoot both made under Chef Somnaths directions and neither overly sweet.

It was a fantastic Bengali meal and all of us were stuffed all the way to the gills.

Arundhati, Chef Sumeet and  The Horby's Pavillion crew took amazingly good care of us, as is the ITC way.

Bringing the happy, smiling and truly great Chef Somnath down was a stroke of genius ... here's looking forward to many more such Food Festivals. The Festival is on today and tomorrow and I seriously recommend you folks in Mumbai give it a dekko.