A lot of my friends have been asking me how its Parsi New year today when the calendrical event is supposedly still 30 days away. This post is a small attempt on my part to clear the murk.

The Parsis of India are the descendants of a group of Zoroastrian refugees who fled Persia some time in the 9th century AD and took refuge on the mainland of India.

The descendants of these refugees are called the Parsis and they are concentrated (today) mainly in Mumbai, Pune, Ahmedabad, Surat, Delhi and Hyderabad. Their biggest contingent of resides in Mumbai and makes up almost 70-80% of the Parsi population of India. There is also a considerable overseas diaspora.

Amongst the many quirky things about this small group of (less than 50 thousand) people is the fact that they celebrate three different days of the year as their New Year Day. There are two very clear subgroups the Shehenshahis and the Kadmis (there is also a smaller group called the Faslis but more on them later).

The original Zoroastrian calendar in Persia was supposedly created by their mythical king, Jamshed. He decried that the year (a solar year) would begin on the Vernal Equinox. This day was therefore called Jamshedi Navroze. On most years this day (when day and night are of equal duration) falls in the northern hemisphere on the 21st of March. On leap years it falls on the 20th. It may also (very rarely) fall on the 19th of March ... this has to do with the computed time slippage of 5 hours 49 minutes per year. Those of you who are astronomically challenged will need to ask Google to sort this out for you.

The Parsis of India continue thus to celebrate the Vernal Equinox as Jamshedi Navroze (Jamshed's New Year) it is an important date in the calendar but it doesn't mark the first day of the Parsi Calender. They celebrate it as an auspicious day and because the Parsis will jump at any excuse for a celebration.

The Parsi calendar is a continuation of the Sassanian Calender of Iran. The last Sassanian emperor was defeated in 642 AD by the Arabs and they installed the Hijri calender in its place. The Sassanian calender consisted of 12 months each of 30 days. To these 360 days of the year were added 5 additional days called the Gathas. This made up a 365 day year. The Persians realised the slippage and calculated that they needed to add 25 lost days each century. So they created a ceremony and a month called the Kabisa where a leap month of 30 days (according to some oral traditions every century a leap month of 25 days plus the the 5 Gathas) was added to the year. This would then sync the year with the solar rhythms.

The add to the confusion the year itself was dated to the beginning of the reign of each monarch and was a Regnal year date. When Yezdegird Sheriyar III (the last Sassanian Emperor) was defeated at the battle of Nehavand he was in his 10th regnal Year, the calendar having commenced from the 16th of June 632 AD. This calendar is still followed in Persia and is known as the Qadmi/Qadimi/Kadmi calender. The Kabisa was never officially performed after the death of Yezdegird. 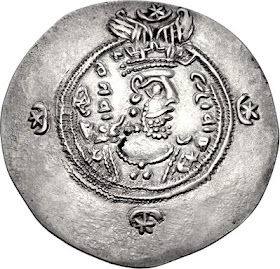 (A silver coin of Yezdegird Sheriyar III - image from Wikipedia)

The Parsis of India on the other hand have a calendar that is exactly one month out of sync with the Persian calendar. Their Navroze falls exactly one month after the Kadmi Navroze. They call their calendar the Imperial Calendar or the Shehenshahi Calendar. The suffix YZ to their year.
This discrepancy was realised by them when they were confronted by it in 1720 AD when an Iranian Zoroastrian priest called Jamshed Velati traveled to India and pointed this out to them. Apparently the Ancestors of the Parsis had performed a single Kabisa and thus the calendar was out of sync by a month. Many Indian Zoroastrians thought they should follow that which was being followed in Iran and converted to this calendar the majority though refused. This led to a rift and two parallel calendars now became current. This resulted in a split in the clergy with separate fire-temples for both groups. For a some time there were no marriages between the groups though now this is no longer true.

In the early 20th century Kharshedji Rustamji Cama (after whom the K R Cama Oriental Institute is named) decided to try and reform the Parsi calendars by proposing: 1. A 365 day calendar with the provisions for a leap year and 2. A commencement from the Vernal Equinox i.e. on Jamshedi Navroze.

It was immediately adopted by a few Parsis but was rejected by the majority as the Orthodox priests refused to switch. Surprisingly the Iranian Government made the same changes in Iran and adopted a new calendar that starts on the the day of the Vernal Equinox! It was called the Fasli (Harvest) calendar. There are few adherents of the Fasli calendar and only a single fire-temple at Churchgate in Mumbai.

Legend has it that the official shift to the Fasli calendar was proposed to the Mumbai Parsi Panchayet (the apex governing body of the Parsis of India) which decided to vote on it. The proposal lost out by one single vote and doomed the community to yet another calendar.
Kurush F Dalal at 5:41 AM
Share